May 8, 2014 Posted By: Jessica Garrett Categories: Interior Design, Lighting
Basements primarily function as a place to bring family and friends together. What better way to do that than through games? The basement space is set apart from the rest of the house and provides the perfect, leisurely atmosphere where you can designate space for large scale games such as ping pong, pool, Foosball, and arcades. Space to play smaller scale board games or Nintendo can also come into design plans.Now, the question is, how can you best design a basement area around gaming? We asked interior designer Janet Ellen Hill of Hamilton Park this question, as well as others, to help us gain more perspective on seamlessly incorporating games into a basement layout. Here is what we found.What not to do: 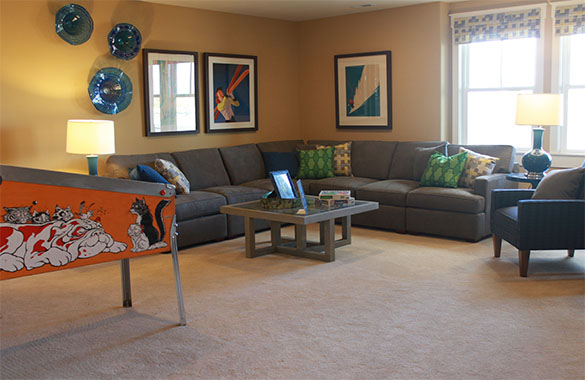 While there are multiple ways of getting a basement layout designed around gaming right, there are also a few mistakes you can make along the way. According to Hill, the worst mistake designers (or home owners) make when creating a multi-functional space is not designating separate space for separate functions. Take the walk-out basement pictured above as an example. This basement area has two functions: sitting/gathering around the couch and gaming. However, those two functions are haphazardly placed into the same space. Consequently, the basement “looks a little awkward,” says Hill as there is no distinction between gaming and living space. She suggests the simple addition of a rug that could be placed underneath the sitting/living area. This would separate the two spaces visually without having to rearrange furniture. 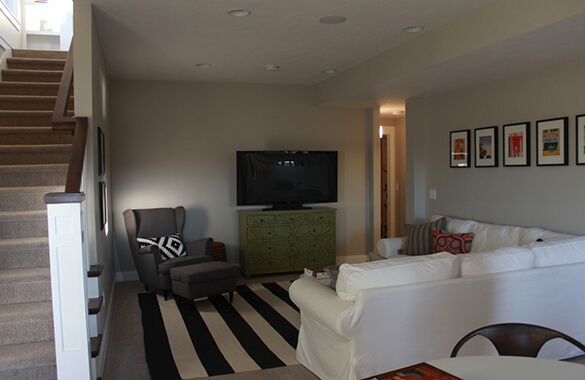 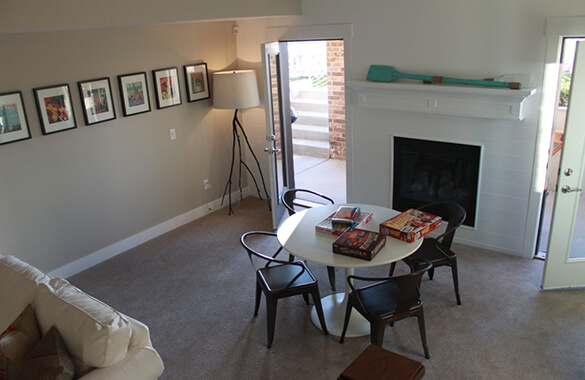 When discussing this second walk-out basement, Hill notes, “Here, they have done a good job at creating a separate spot.” From the two photos above, you can see the designers have created a multi-functional room in a relatively small space. The table and chairs act as as a gathering place for games, while the couch area provides an additional gathering area focused around the watching movies or television. By facing the couch in the opposite direction of the gaming area, the designers made the distinction of two spaces very clear, the back of the couch acting as a visual barrier. When asked how the designers could have separated the space further, Hill suggested situating a bench behind the couch to act as additional seating for the gaming area. She also proposed placing a wide and low shelf (under or instead of the bench) that could provide the dual function of visual barrier and “a natural place to store games.” This shelving unit could be placed behind the couch or against the wall underneath the framed photos, says Hill. You could also distinguish space through lighting. However, Hill cautions against this idea here. In considering the placement of the fireplace and exterior doors, the addition of a hanging lamp over the table would be awkward and unnecessary. When asked about the use of rugs in this particular space, Hill suggests using two, complimentary rugs to further distinguish the space: one rectangular for the couched area and one circular for the gaming area. What a great idea! 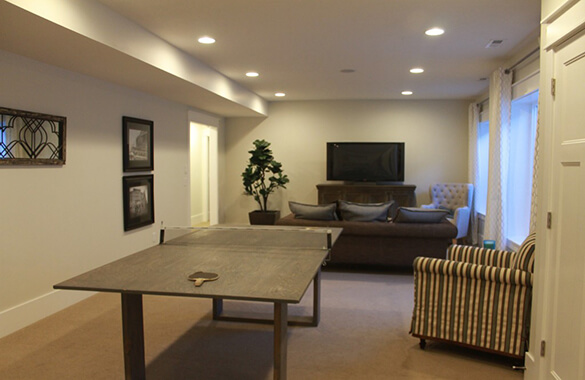 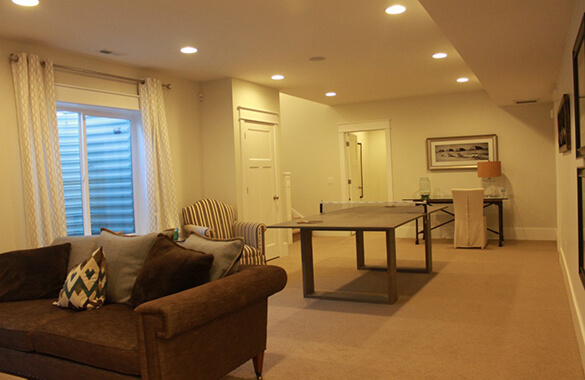 It was in this basement pictured above that we found the “practically perfect” gaming basement. The spaces for movie watching and game playing are clearly separated by the barrier of the couch. The designers have utilized the long, rectangular shape of the room to the home-owners benefit by giving the space two functions. Consequently, the basement feels intimate while still being spacious. This basement can accommodate for large groups of people wanting to do two different things without getting in each other’s way. However, with her experience, Hill does have a few suggestions. “Replace the chair in the corner with a telephone table (12″x12″) to store paddles and ping pong balls,” she proposes. She would also place a bench along the wall with framed art to create more seating for those wanting to watch the game.In conclusion…Hill had a few other suggestions regarding basement in general: On lighting and paint: Hill suggests canned lighting rather than fluorescent lights or lamps in order to make the space feel more airy and light. A lighter color of paint on the walls can also add to this ambiance. “You don’t want it to feel like a basement,” she notes. On designing any space: “Design is three dimensional,” says Hill. In order to properly design a space, you have to experience it in real life and not just in pictures. On ceiling height: Hill suggests that 9-10 foot ceilings are best, even in a basement space. Once again, you want the rooms to feel airy and light.

We concluded our conversation talking about functionality. If homeowners and designers can couple function with design, they will end up with a space that is both useful and beautiful. “In the end, it’s all about function,” says Hill – an important idea to carry away no matter the space you’re creating.

Janet Ellen Hill is an interior designer and works for Hamilton Park Interiors. She helps clients create the home of their dreams by consulting on decisions ranging from furniture to paint to floor plan. See what services she offers here. Hill has also worked for Repartee Art Gallery as an art dealer and framer linking clients with local artists and consulting on placement and framing of purchased art. Contact her at hill.janet@live.com